Made for TV Movie directed by Leslie Libman from 2016.

Living in the time of Charles Manson and his family this movie is told through the eyes of Linda Kasabian. 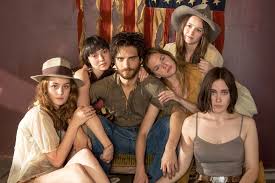 Linda came to the Charlies ranch pregnant a runaway nowhere to go and his girls welcomed her.  Charley was an existential musician with connections to the Beach Boys.  High on drugs and party’s the girls were shared amongst the men and everything was Charley’s.  When it came time to pay the bills they stole from people and food to survive. In ways they foraged and had a sense of freedom and fun doing so.

To pitch in and stay according to Charlie sex with strangers was kosher but all his girls loved him.  He was a sex appeal…

“Charley are you crying…?”

“Jesus wept when he went to Jerusalem why wouldn’t I?” 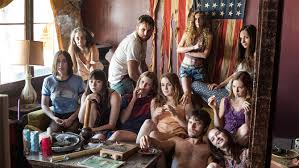 Getting high and going to empty homes to steal was a way of life the girls got used to it clothes, jewely, watches anything they could find…

Ultimately Charley got the spoils from their looting. Charley wasn’t getting anywhere with his music and Charlie was beginning to see hidden messages in a beatles song helper skelter. A war between blackie and whitie on speed and shrooms to them Charley could perform miracles he was magical. 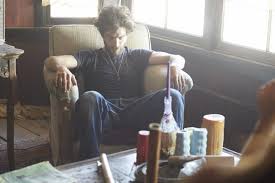 Gary Hindman a local music teacher was a friend, came to the ranch a lot to listen to Charlies preaching of a race war.  Charlie got mad even when one took more then their fair share.

After been shared with Andy Sara tried to leave… Dennis Wilson according to Charlie made a promise to find him a record deal it fell through and Charlie pulled a gun and gold him to get off his ranch.

Tex is a cop also known as Charley’s right hand man and drug dealer and tries to convince Charley to find another record dealer but eventually he agrees they’ll make their own record so when it’s all done they’ll come begging to sign them. You can see Jeff Ward coming into character a sometimes violent control over those who don’t seem to believe what he sees the revolt.

In the age of the hippie thus was what I believe brought the 60s to a halt that pivotal moment in history when Charley went on a murder spree.  Killing drug dealers and on up into the home of Roman Polanskis home where Sharon Tate was sleeping with a few guests.

When Does the line cross over when a simple night of thievery turns into a slaughter of the innocents. A war with the Panthers armegeddon is here!

For a lifetime Movie this film wasn’t too bad I give it a 5 out of 5 star Rating for I think it’s edgy especially for lifetime normally they are sappy live dramas I loved it.  I totally recommend this for Manson movie fans around the world.

“Dance with Freedom my soldiers my family! I’d kill for you would you kill for me? Would You die for me? Time doesn’t exist…”